This reading room project has been developed alongside Thomas Jeppe’s exhibition “Afterhours (2010-2020)” at Galerie Balice Hertling, October 8-18, 2020. Most of the works from this show were originally accompanied by essays, interviews, reference books, or collaged texts. These printed publications build upon the subjects that informed the works, and were intended to circulate beyond the art object and outside the gallery context.

Many of these texts also doubled as issues of the Mimetic Club Bulletin, a newsletter which started in 2012 as a platform to discuss dancefloor-related topics and has expanded laterally since. The sections below provide a brief overview of each project with a link to PDF versions of their corresponding publications. 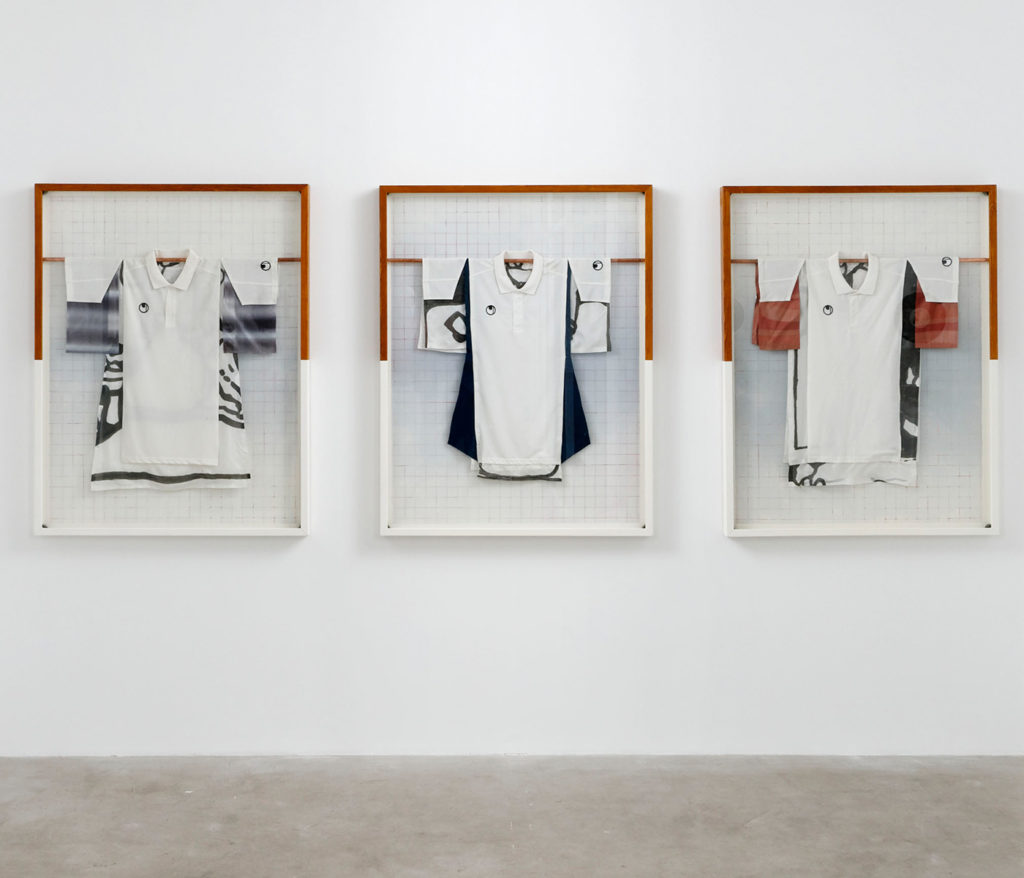 Three textile works mounted under glass and over oil serve to deconstruct the Uhlsport polo shirt by combining it with hand-painted silk previously exhibited in Tehran.

These kimono-polo hybrids were presented alongside Mimetic Club Bulletin issue #8, The Mirror, which addressed Uhlsport’s sponsorship of the Iranian national football team, the aesthetics of cultural exchange, and the the flow and restraint of information from west to east. 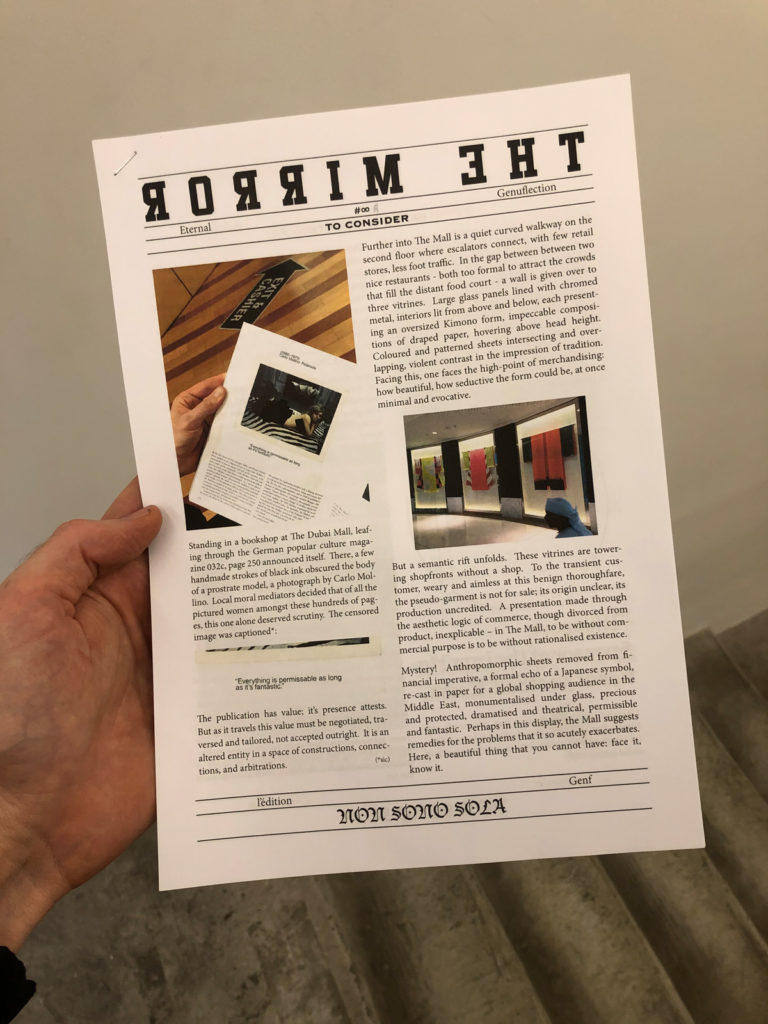 This series of paintings depicts male protagonists either nude or with an ambivalent relationship to clothing. The principal title of these works, Mé Vzpomínky translates from the Czech as “My Memories.”

Accompanying this series is the publication Neo Lad, which describes a culture of youthful urban masculinity that defines, expresses, and reproduces itself through clothing. 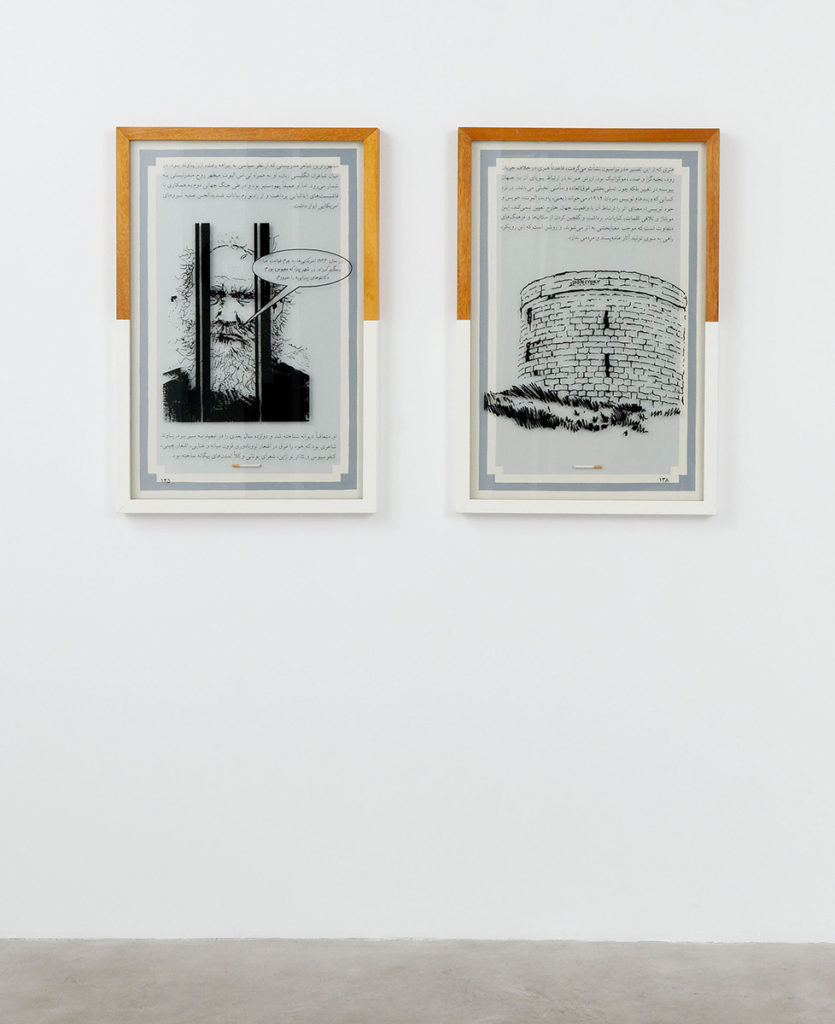 This group of works centers around an Iranian bootleg of a Cultural Studies textbook. Pages from the Farsi version of “Introducing Postmodernism” have been printed on glass and installed over a painted impression of the wallpaper in the Shah of Iran’s former summer palace. A single Iranian ‘Bahman’ cigarette, three-quarter size, floats between each glass and its background.

Images of the Shah’s summer palace and scraps of Bahman cigarette packaging return in the RKX Reference Book. Here, pages from the original English text are presented alongside the artworks based on their Farsi counterfeits.

The RKX series was exhibited in part at Berlin’s 032c Workshop in 2014. This occasion saw the release of Abstract Journalism, a manifesto text that provides an overview of artistic research practice that privileges digression and indirectness as a way of engaging cultural issues. 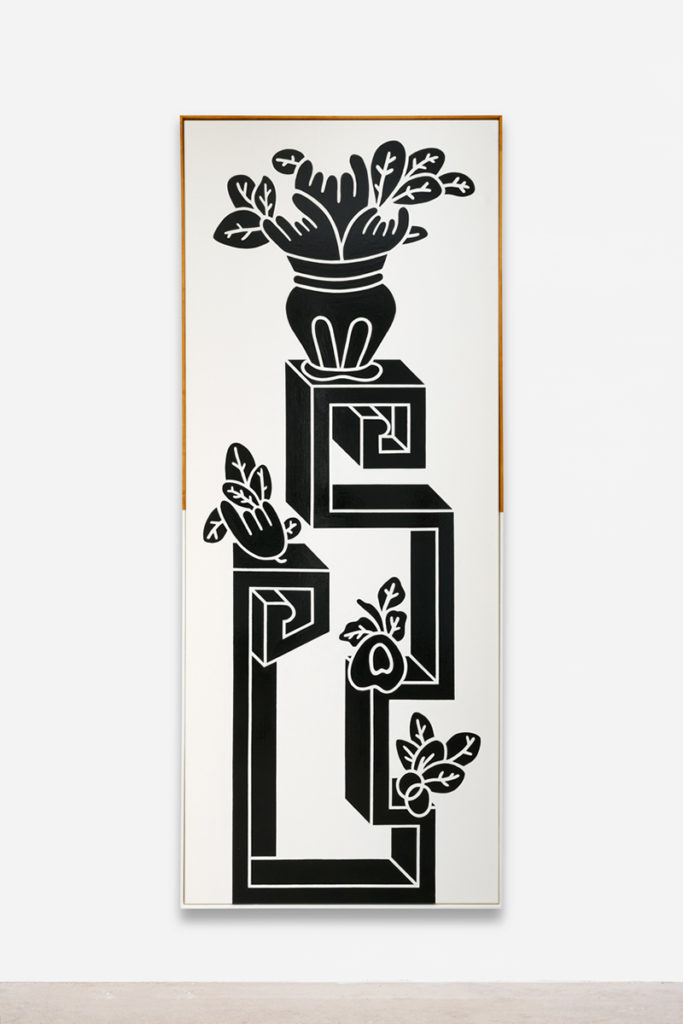 The Asiatische Adlernase series was accompanied by a publication of the same name centred around an in-depth discussion with a German gallery director who left the art world in search of an objective master culture and found it in Taiwanese tea. Through his subsequent attempts to create a tea business in Germany, the question became: how can we create a cultural ritual where there is not one?

The paintings from this series appear as chapter markers throughout the book. Limited copies of the book’s second edition may still be purchased through the Edition Taube publishing house. 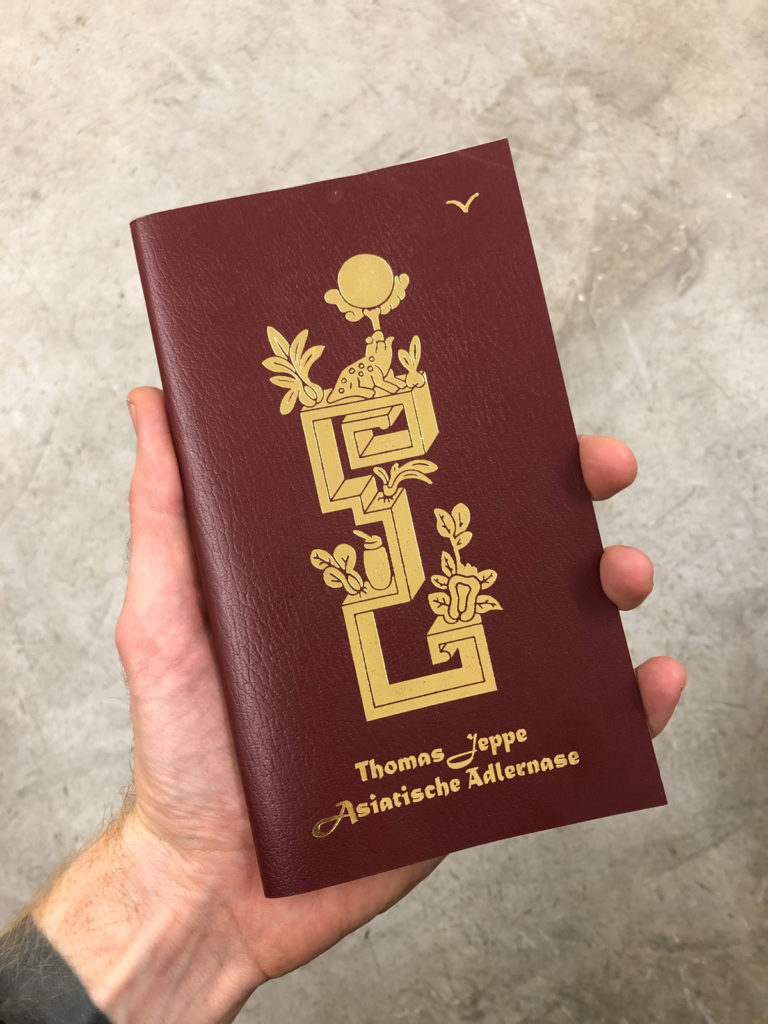 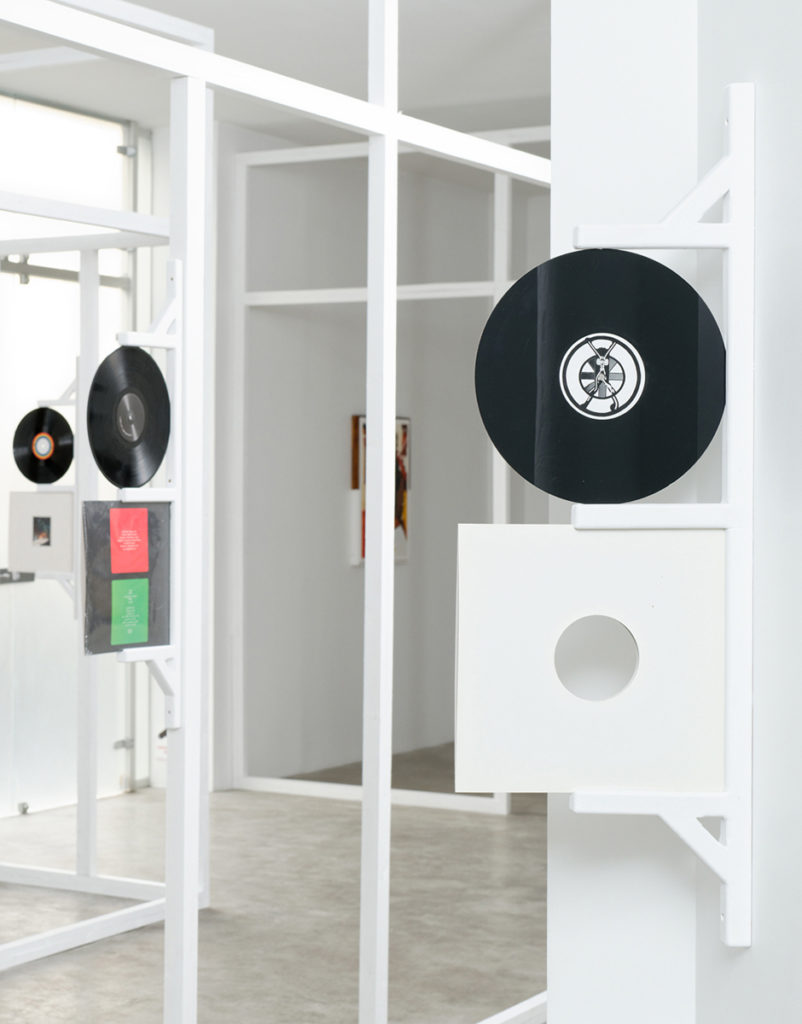 This record formed one component of an installation with Mimetic Club Bulletin #13 that was presented at the Fondation Ricard in Paris, in 2017. Pressed in an edition of one with no digital version available, this work could only be heard in the specific setting of this exhibition.

Young Nomads was produced by Low Jack, with vocals by Bonnie Banane, using software developed at IRCAM to emulate the voices of the castrati, male singers who were castrated before puberty. Since the last castrato died in the early 20th century, an entire genre of music written for castrati has remained unperformed, since no human body has the physical characteristics needed to achieve this vocal range.

The lyrics are derived from a section of Gilles Chatelet’s “To Live and Think Like Pigs” (Vivre et penser comme des porcs), in which a letter is addressed to a cosmopolitan class of placeless globetrotters, the titular Young Nomads.

These lyrics are reproduced in their entirety in Mimetic Club Bulletin #13. This issue includes notes and charts from research conducted by the Institute for Research and Coordination in Acoustics/Music (IRCAM) in development of their software that emulates castrati voices. Also in this issue is writing from Manuel Garcia, the vocalist and inventor who was the first person to see the human vocal cords in action. 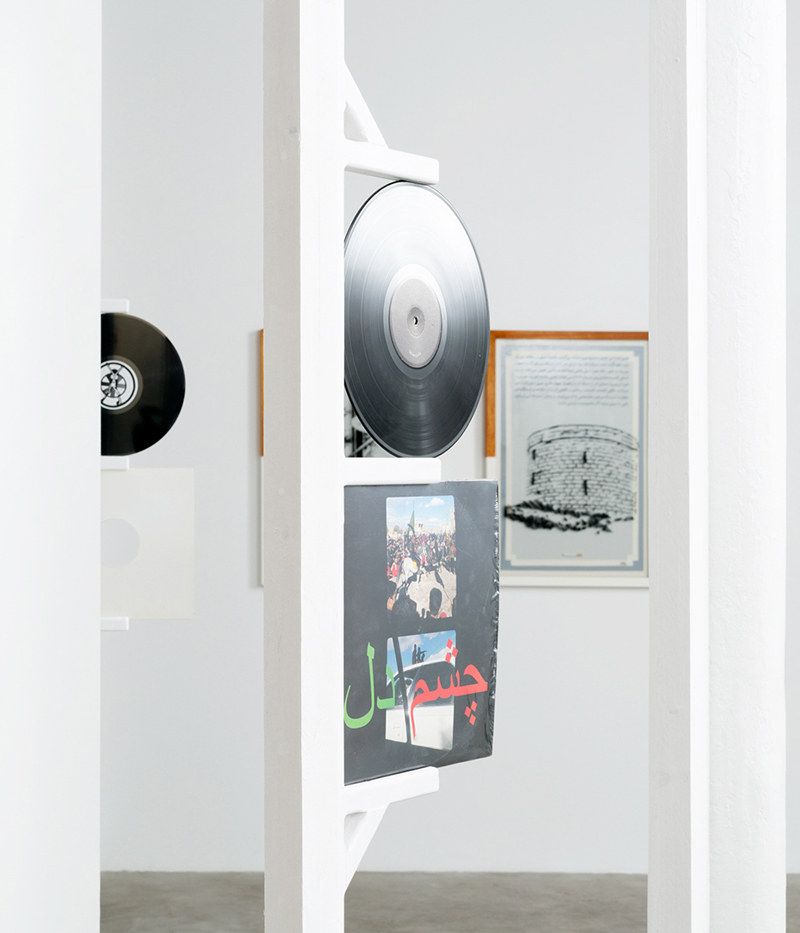 The Tchashm-e-Del album, released by Collapsing Market, was remastered from a cassette tape of compositions made for Iranian radio by Morteza Hannaneh, co-founder of the Teheran Symphony Orchestra.

The record was designed by Thomas Jeppe and Manuel Buerger, and features low-resolution photographs of public theatre and street scenes in the villages around Esfahan. A limited number of publications were produced as an appendix to the record design, giving an extended context to this visual material. 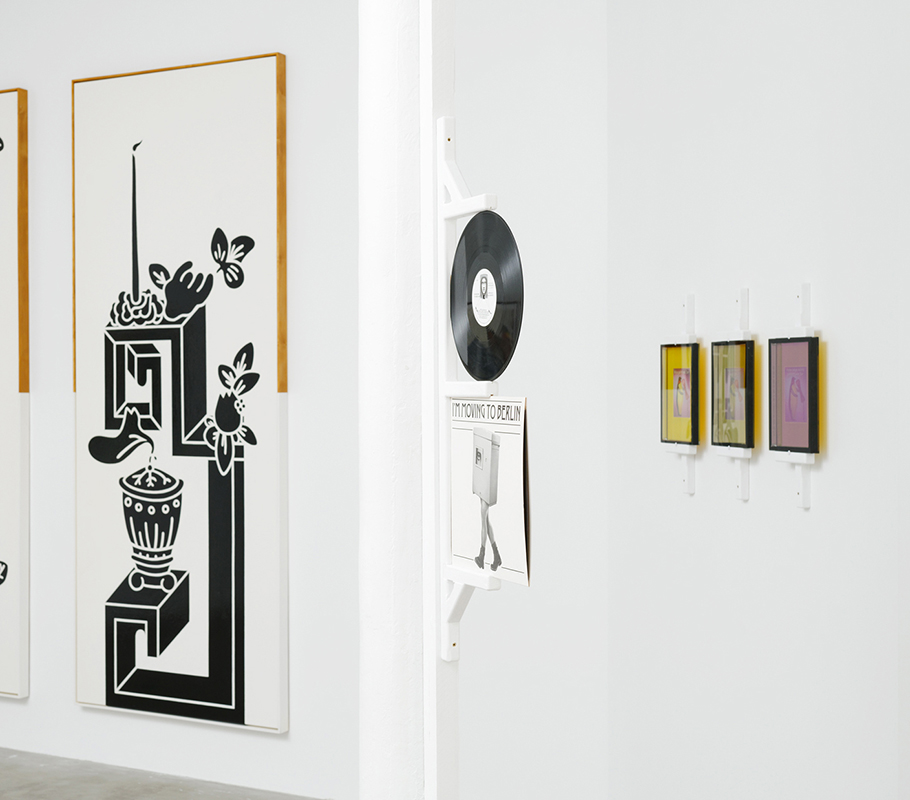 The cover of Bell Towers’ record, released by CockTail d’Amore Music, was commandeered as the platform for Mimetic Club Bulletin #16.

This issue of the bulletin consists of assembled YouTube comments on videos of an outdoor rave in Perth, Australia, in the early ‘90s, coupled with quoted lyrics from Spanish Guitar by Toni Braxton, who also appears on the interior record label.